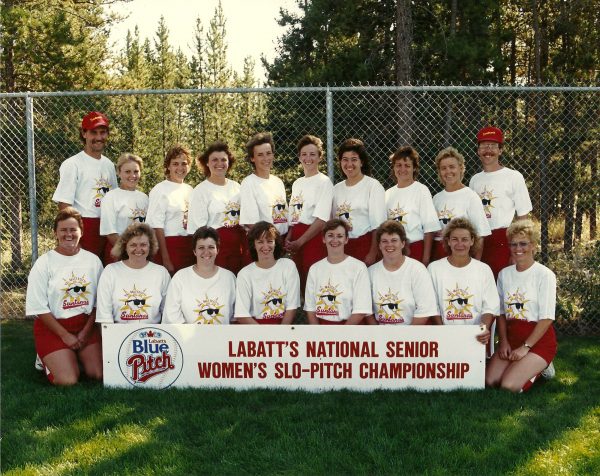 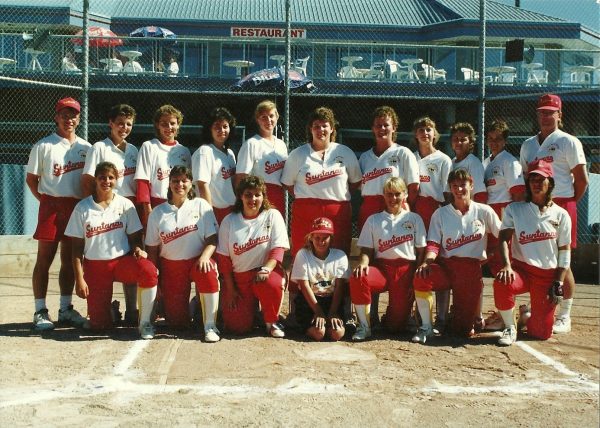 The Val Matteotti Suntanas women’s slo-pitch team was born when athletes from the Bow Island Silver Sage Bullets and the Tamaki Imperial A’s made the decision to work together, instead of against each other. The team played together for 4 years, won Softball Alberta Provincial Championships in 1989 and 1991, was Lethbridge Ladies League Championships during all 4 years and won almost every tournament they entered. The success of the team included 2 gold and 2 bronze medals from the Labatt’s National Senior Women’s Slo-pitch Championships that were held in association with Softball Canada.
Whitehorse, Yukon was the location of the National Championships in 1989 for this newly formed team, and they had one goal in mind: a gold medal. They started the tournament with a 6-3 loss to Ontario; a combination of nerves along with being a bit rusty. The powerhouse Suntanas had cruised through most of the season without facing the quality of teams that had gathered in Whitehorse. After that opening loss, they turned things around and one-by-one, knocked off teams from each of the other provinces, outscoring their opponents 91-20 during round robin play. Three more wins were needed to earn that gold medal. The first was an 8-2 win over the team from British Columbia, followed by a 10-6 win over Quebec. The Quebec team fought their way back to the final with a win over Ontario, before losing to the eventual National Champion Val Matteotti Suntanas 5-1. Pitcher Wendy Pomreinke summed it up best, “It was a great team effort and it couldn’t feel better.”
Ten of the Suntanas players returned in 1990, but they struggled during the season and placed third at the provincial championships. Fortunately, the team was able to gain momentum as they travelled to Moncton, New Brunswick for the Senior Women’s National Slo-pitch Championships to defend their national title. The team was able to avenge the provincial loss to the Alberta representative, Kennedy Oil Field, 8-1 during round robin play and was in third place heading into playoffs. After dropping games to Ontario and Quebec, the team walked away with a bronze medal.
The Suntanas started the 1991 season determined to recapture the national crown. They won 4 major tournaments leading up to the Canadian Championships, including the United States National Qualifying Tournament in Montana, and entered the tournament with a 38 and 0 record. Softball City in Surrey, B.C. hosted the Labatt National Senior Men’s and Women’s Slo-pitch Championship in 1991. The Suntanas opened with 4 wins before running into strong teams from Ontario and Quebec, including the defending champions. They finished the round robin with a 6 and 3 record and started down what turned out to be a long playoff road. Wins over Ontario and the defending champions from Quebec, landed them in the A side final, which they lost to the team from Bradner, B.C.. They fought their way back into the gold medal game with a win over Quebec. To win the gold medal, the Suntanas would have to beat B.C. twice, which they did, by scores of 4-3 and 10-8. In the end, it was the countless years of combined national championship experience by the members of the Suntanas that tipped the scales in their favor and they walked away with a second national gold medal.
At the end of the 1992 season, after 4 years of hard work and dedication to the team, the women made the decision to disband the Suntanas. Some of the players stepped away from the sport to focus on their families, while others continued to play for other Southern Alberta teams. One would be hard pressed to find a team in Canada as talented and committed to the sport of slo-pitch as the members of the Val Matteotti Suntanas.