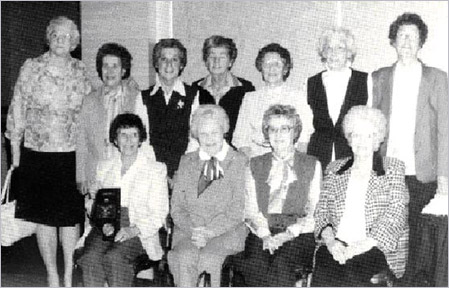 In the early 1930’s the Calgary Softball League was rated the best in Canada. It included the Parkhill Vics, Paramounts, Hudson Bay and the Wittichens.

Sports writer wrote in 1935: “After vainly trying for five years, it looks as if Parkhill Victorians are on their way to the senior ladies’ provincial softball title. Undefeated in league competition this year, Vics stepped out on Dominion Day to hand two decisive setbacks to Lethbridge Teco Adanacs, provincial champs of 1933 and 1934 and, previous to the holiday, the holders of a successive string of spectacular triumphs over some of the finest ladies’ teams in the province.

“The Vics were full value for their victories. Behind the steady hurling of Vera Stuart in the opener and Isabel Grinton in the nightcap, they successfully knocked the offerings of Hazel “Mike” Bruce all over the lot to show that they pack plenty of power at bat as well as in the field.

“Vics have been knocking on the door of softball fame for a number of years now. Back in 1933 they were the chief threat to the hopes of Paramounts for city honors and in 1934 they lost out to the Tecos in the Alberta finals. This season has been their greats since organization and they are looking forward to returning the symbol of women’s softball supremacy to this city.

“While the Vics roster has changes from year to year, three of the players who were with the first Parkhill aggregation are still in the lineup. They are Elma Royal, Pauline Royal, and Marg. Squance. The majority of the girls are playing with the team for the third season. It was only late last fall that Del Folger took over the coaching assignment of the team that Alf Boyce has managed since its inauguration, but the results of his tireless work are plainly seen in the fielding and hitting ability of the city league-leaders.”

“The Vics were probably the finest girls team that has been developed in Alberta, as was proven when they handed the Lethbridge Adanacs a 15-1 trouncing in the final game. Alf Boyce started the team as youngsters several years ago, and is just beginning to get results, as the squad have developed into hard hitters, smart fielders, and the fastest base runners of any team in the province, and should be heard from again next season.”

The Vics won the Alberta in two straight games in 1936, also defeating a Lethbridge team, but were knocked out of the 1937 Provincial by Edmonton’s Canada Packers Team.