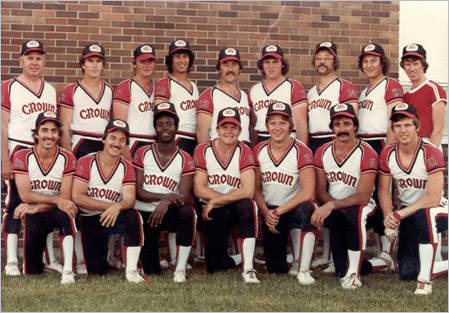 The Edmonton Crown Well Oilers fastball club was formed in 1979. The principal owner of Crown Well Servicing Ltd. was Bill Guzak with his major partners, Fred Wasylyshyn and Elmer Schafer. The ownership group was instrumental in the success of the fastball club.

In 1979, the Crown Well Oilers won the Edmonton Major Men’s league championship after finishing in second place, just two points out of first, with a 17 win, 10 losses and 3 tie record. The rest of the season was made up of major tournaments throughout Alberta and Saskatchewan where they were highly successful.

Crown Well realized early that to be competitive at the provincial level they would have to look elsewhere to be a contender in a strong Alberta hot bed of Senior ‘A’ clubs. In 1980 and 1981 the team recruited players from Ontario and the NWT., complimenting a strong core of existing players. They recruited mainly Junior ‘A’ players from Ontario and the 1979 Canadian Junior ‘A’ Champions, Ponderosa Steak House. They also recruited the top sling shot style pitcher in Canada, Ed Unruh from Ontario. In 1980, Ed Unruh also pitched for the Canadian National team when they won the world fastball championship.

This set the stage for the year that the Crown Well Oilers were about to have.

In 1981, the Oilers continued to play in the EMMSL plus the tournament trail throughout Western Canada and the U.S.A.

At the 1981 Senior ‘A’ Men’s Fast Pitch Provincial Championship, the Crown Well Oilers were winners of the ‘A’ side by defeating the Camrose Merchants. The Merchants then went on to win the ‘B’ side event to qualify to play the Oilers. In the 1st game, Camrose defeated Crown Well 2-0 in 11 innings. In the 2nd and final game the Crown Well Oilers defeated Glen Jevne and the Camrose Merchants 1-0 in 9 innings to capture the 1981 Alberta Senior Men’s Fast Pitch Championship and advance to the Canadian Championship in Ottawa.

At the 1981 Senior Men’s Fastpitch Championships the Oilers went 2-2 in the round robin. With the round-robin completed, the Oilers were seated in the #4 position behind Saskatchewan, British Columbia and Ontario. There were 11 teams representing their provinces and territories at the Championship.

The Crown Well Oilers made there way to the final by playing B.C. in the semi-finals winning 1 – 0, and then winning against Saskatchewan 1 – 0 in the “A” Side Final. The Oilers then played against Ontario in the final and won the game 1 – 0.

The game was a marathon being tied 0-0 going into the 13th inning. In the top of the 13th, the Oilers broke it open scoring 5 unanswered runs to defeat Ontario 5-0 and capture the 1981 Canadian Senior Men’s Championship.

The Oilers used two pitchers at the Championship, Jeff Boyce and Mike St. Pierre. They combined for a total of 90 strikeouts in 7 games.

The Crown Well Oilers was the first Alberta team to win the Canadian Senior Men’s Fast Pitch Championship. With an average age of 24 they were the youngest at that time to win the Canadian title. They were described as, “a young team, with excellent speed, aggressive hitting and great pitching”.

As defending Canadian Champions, in 1982 they were ranked the #1 team in the world by the Amateur Softball Association.

On March 18, 1982 the Oilers were honoured by the City of Edmonton at the Annual Honours and Awards Banquet for athletes and teams for their achievements in recreation and culture.