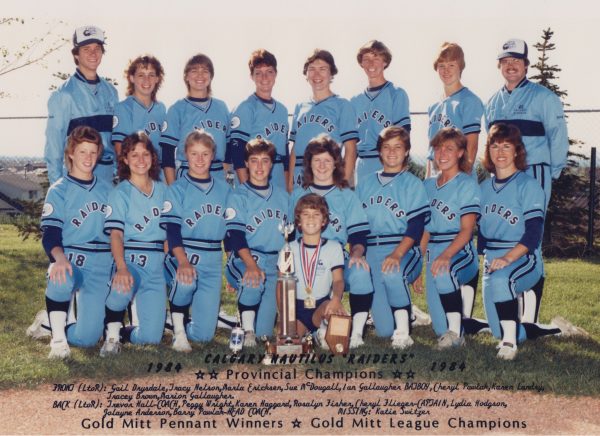 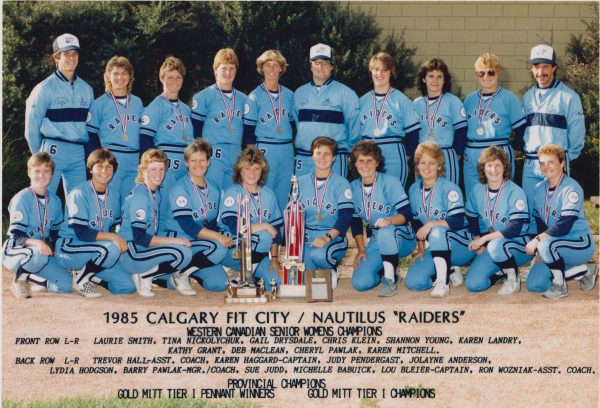 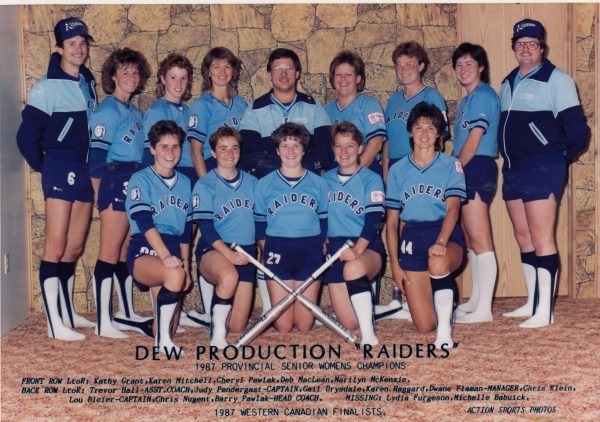 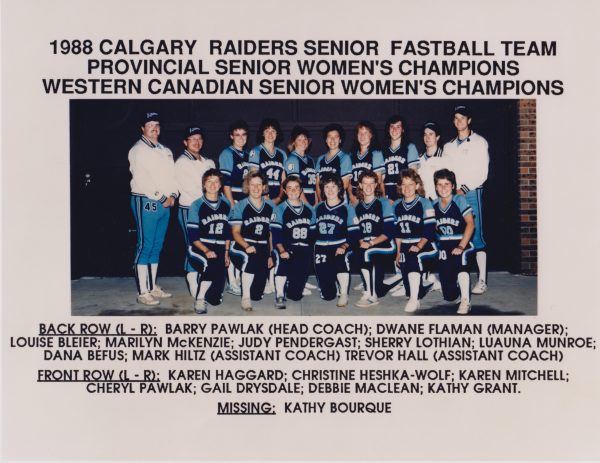 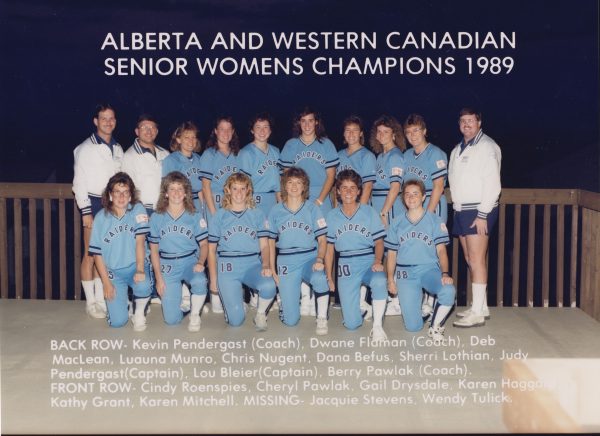 The Raiders fastball team was created in 1982. Starting in the Calgary Ladies Softball Association, they compiled a 46-9 record in league and tournament play.

In 1984, the Raiders committed to building a framework that would allow them to compete for championships year after year. They won the Gold Mitt Pennant with a 21-3 record and won the League Championship 2 games to 1 over the Esso Bees. They also won seven of the 10 tournaments entered, won the Provincial Championship, going 5-0 through the weekend. That was followed by winning the Western Canadian Intermediate A Championship, defeating Richmond, BC in the gold-medal game. This was the first time that a Calgary team had won a Western Canadian Championship at any level. The cumulative record for the season was 68-7-1.

1985 was the year the team moved to the Senior B level. Their record on the season was 64-11 and, once again, they won the Gold Mitt Pennant, going 20-3 and winning the championship in two straight games in the best of three final. Raiders won the Provincial Senior B Championship, once again defeating the Bees for the title. Throughout that season, they competed in eight tournaments, winning four and finishing second twice. Continuing their success, they won the Senior B Western Canadian Championship over the defending champion Victoria Breakers and capped off the season off by competing in a champions tournament in San Diego where they made it to the semifinals before losing to Redwood California 2-1 in 10 innings.

1986 was a disappointingly short season, as the team lost in the provincial final, but 1987 would be a different story. Once again the team won the Gold Mitt Pennant with a 22-2 record and beat the Red Devils in the League Championship. The Raiders won five of seven tournaments entered, including the Molson International ABC Super Tourney and only finished second once. At Provincials, they defeated the Jolane Seniors and once again qualified for the Senior B Western Canadian Championships. They once again made the finals, but the Victoria Breakers gained a measure of revenge by defeating the Raiders in nine innings in the championship. Settling for silver medals, their season ended with a remarkable 62-5 record, but just shy of their goal of another Western gold.

The loss in 1987 provided a renewed passion to reclaim Western Canadian supremacy in 1988. They went 19-1 in League play and won the Championship in two straight games over the Bees. Again, the Raiders won the Provincial Championship over the Jolane Seniors and advanced to Westerns where they compiled 9-1 record and won the Championship over the Souris Manitoba Blues. Overall, the Raiders competed in 10 tournaments and travelled throughout BC, Alberta, Saskatchewan and Montana, winning five and finishing second once, finishing 59-14-3 on the season.

The 1989 season saw a change in the Raiders program. In 1988, both the Calgary Sun and Calgary Herald stopped publishing stories and scores for amateur sports in their sports sections, except on rare occasions. Largely because of this, the Gold Mitt Softball Association lost its major sponsor and merged with the Calgary Ladies Softball Association. In 1989, the Raiders chose not to compete in a city league and participated only in tournament and exhibition play. They won five of the eight tournaments that they participated in (going 30-4), including the Saskatoon Invitational Challenge Cup, beating White Rock, BC in the final. They once again won provincials over the Edmonton Boston Pizza Royals and then the Western Canadian Championship over their nemesis, the Victoria Breakers. They finished the season with a 42-7 record.

The Calgary Raiders success through these 5 seasons was outstanding. They ate, slept and breathed softball every minute of the season and it showed. They would get on a bus on Friday after work, travel somewhere in Western Canada or sometimes the Northern US, play a tournament, get back on the bus on Sunday evening and travel back home, often arriving in the early hours of Monday morning when they would go to work and get ready for league play and practice during the week. Then it would all be done again for the next week. Congratulations to the Raiders on all their successes!