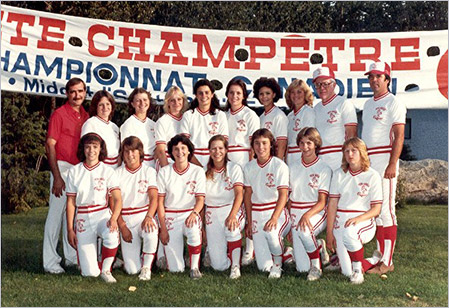 The Ardrossan Hen House Coiffures was a small-town team that was considered one of Canada’s best Midget girls teams in the early 1980’s. During their ten years together, four of which were devoted to hard work and development, they became one of Alberta’s top teams, earning six consecutive provincial championships from 1976 to 1981. They went on to finish in fourth place at the 1980 Midget A Girls Canadian Championships, and then claimed that title in 1981, going undefeated throughout the tournament to become the first midget girls fast pitch team from Alberta to win a Canadian Championship. Led by coach Danny Holland, this extremely talented and motivated team also earned four All-Star and Most Valuable Player awards at the tournament. To go from the grass roots of a small hamlet and become one of the top teams in the country is truly an accomplishment as the Ardrossan Hen House Coiffures celebrate their 25 th anniversary.