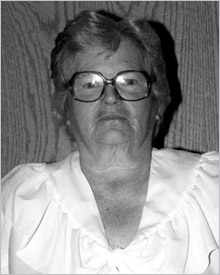 Mary Ball of Ardrossan, Alberta, was coaxed into coaching a Squirt Girls team in the late 1950’s. From there, she went on to coach boys predominantly, and although her championship teams were the most noticeable, it reflects only a small measure of the teams she assisted with her time, effort, support, and personal finances.

Her contributions can be measured by the inspiration that she provided to other people and the interest that she created for the sport in the Ardrossan area.