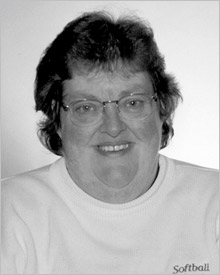 Linda Edey began her softball career as a minor player for the Edmonton Federation of Community Leagues in 1961, and went on to play with the CJCA Tigerettes of the Edmonton Ladies Softball Association until 1972, when she took over the coaching reigns at Grant McEwan College. Her involvement with the Edmonton Ladies League extended beyond coaching; Linda was an umpire, a statistician as well as secretary and president throughout her 17 year involvement with the league. She was also the secretary, treasurer and Director of Finance for Softball Alberta, and is largely responsible for the solid financial position of the association throughout her 28 years of participation. Linda is a master draw maker, and has lent her talent to Softball Canada, as well as provided templates for numerous Western Canadian and Provincial championships. She has chaired several Midget, Junior and Senior Women’s Canadian Championships, and was the chairman for the first ever World Youth Softball Championships in 1981. She started the Capital City Softball Association, and help promote softball through the hosting of Provincial, Western, and World Youth Softball Championships. She is also largely responsible for the growth of Softball Alberta, overseeing it from a group of volunteers to a full time staff, as well as having it become the only province that provides substantial dollars to teams advancing to post-provincial play. Her induction into the Hall of Fame is a culmination of over 40 years of dedication to the sport of softball.