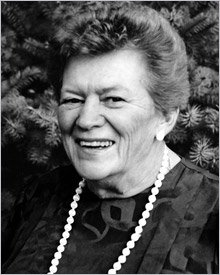 Kelly Quinn of Kitscoty, Alberta, began her forty plus years in the sport as a player in 1945. In 1952, she helped to organize the Kitscoty Klippers Ladies softball team that participated in the Big Four League.

At the same time she was coaching a Squirt Girls team. After her kids were done playing softball, she went back and assisted many teams from the area at getting to the provincials, and became involved in the improvement of the local sports grounds. Kelly Quinn put back into the game she loved.