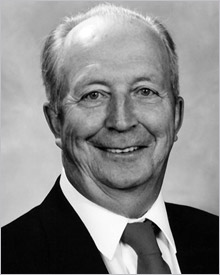 Howard Kinshella began his softball career in 1937 as a shortstop with the Hazeldean Men’s team that competed in tournaments throughout the province. He became a head coach of softball teams for eighteen years from 1954 to 1971. Under his direction and motivation, his teams won Championships in 1957, 1959, 1960, 1962, and 1971.

He was incredibly resourceful in obtaining sponsorships for the teams he coached and was known to be extremely fair with all of his players. Howard was a very well respected man.

Howard Kinshella was a promoter of all sports and especially softball. His resourcefulness as a coach and manager set the bar for the administrative side of the game in Alberta.