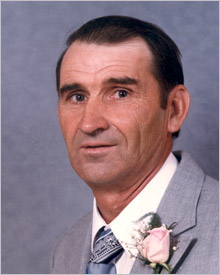 George Stewart was born in Hanna, Alberta in 1928 and moved to Lakedell in 1935. He has lived in the Pigeon Lake area ever since. George and his wife Fay raised seven children, five boys and two girls. George started coaching softball at Falun in 1970 and continued to do so for the next twenty five years. During that time he coached both boys and girls and his teams garnered seven Provincial titles and eleven runner-up awards. Besides coaching softball, during the 1970’s he also coached hockey in Wetaskiwin and drove his five sons and a neighbor boy back and forth to town to play.

As a youngster George played ball at school but not on any organized teams. He was however a “student of the game”. When attending tournaments as a coach and his team wasn’t playing George would watch the other teams and analyze their strategies. George’s philosophy was that “the bench warmers were the best players” and his own children can attest to that as he showed no favoritism towards them. Without formal coaching training he did the right things like training his players in the Falun Elementary school gym before the season started and working with his daughter Heather and her pitching in the basement during the winter months and in the yard as soon as the snow was gone. He even used a radar gun to track the speed of the pitches. Often the teams he coached had no league to play in, yet, even so these teams from a small community were provincial champions. His teams practiced a lot and George also kept statistics on his players. To George it was better to challenge his players at a higher level of competition rather than winning at a lower level in the play-offs. To improve the players batting he convinced the Falun Committee to buy a batting machine which helped all of the Falun teams. His own team raised half of the money for the machine. George often transported players who didn’t have rides and sometimes he even bought team uniforms, balls, bats, bases and plates for his teams.

From 1970 to 1978 George coached the boy’s softball teams, and in 1972 they won the Provincial Championship. George stayed with that group of boys (including two of his sons, David and Tom) until 1978 when they won the Midget “A” Provincial title & represented Alberta in the Western Canadians.

In 1979 George started coaching the girls. His wife had coached the team that included their daughter Diane and up until that point the girls were “playing for fun”. George finally convinced Diane that they weren’t going to win with her underhand pitching style and she was going to have to learn the windmill. She did and as Bantams in 1980 they were second in the Provincials and in 1981 the girls won the Provincial “B” title. George stayed with that group of girls until 1984 when they lost out to Calahoo in the zone play-offs but two of his players, including his daughter Diane were picked up by Calahoo and made it all the way to the Canadian Championships where they won the Bronze medal. George went along as scout for that team.
Besides coaching, George was also involved working on the Falun Sports Committee. Many times over the years his team was the host team for the Provincials. When that happened George not only coached the boys or girls but he and his wife also looked after the hosting details. During the time that George was involved in the Falun program, to Softball Alberta, Falun was the “Capital of Softball” and this was in no small measure due to his contribution. For his efforts George was awarded the County of Wetaskiwin Volunteer Sports Award Plaque in 1987. He has also participated in curling for over 50 years.

Because of his many years of coaching and achievements with the Falun Softball Program, George was inducted into the Wetaskiwin & County Sports Hall of Fame in March of 2008.
Inducted as a Sport Builder in 2008.