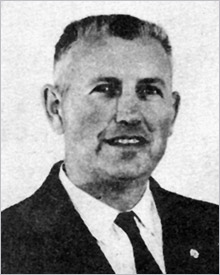 George Lehnert of Calgary served softball and his community, West Hillhurst, in many capacities.

Prior to 1945, George played softball but then turned his energy into officiating where he was active until 1969.

During his 24 years as an official he was Chief Umpire for twelve years and was President of Softball Alberta from 1959 to 1964.

George was an executive officer of Softball Canada for seven years.

Minor Softball in Calgary has benefited from George’s expertise and he was honored as the Federation of Calgary Communities “Community Worker of the Year,” for his work on the West Hillhurst Sports Complex.