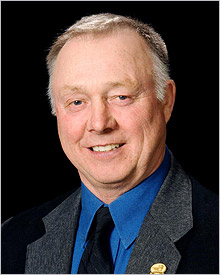 Born and raised in the Wetaskiwin area of Alberta , Brian Brown has always had a passion for sports. He played slow pitch in Falun, Alberta for six years and played hockey for the Falun Hockey Club for 25. However, once his sons showed interest in playing sports, Brian became involved in coaching both fastball and hockey.

Besides coaching, Brian’s time was also occupied with the administration of Falun’s fastball program. This involved organizing tournaments as well as acting as chauffer, grounds keeper and coordinator. Brian was also instrumental in having Falun’s diamonds upgraded with shale, bleachers and players dugouts. It was during his coaching years that Falun became known as the “Fastball Capital” of Alberta.

Brian was selected to receive the Alberta Amateur Softball Association’s Award of Merit for his contributions to softball in his community. In 1988, he received the Winter Olympic Coach Award and during his involvement with the Wetaskiwin Icemen hockey team, was given an honorary ‘Iron Man Award’ for attending all games and practices, an award typically given to players. Finally, due to his outstanding contributions to the young people of the Wetaskiwin community through his coaching of hockey and fastball, Brian was inducted into the Wetaskiwin and County Sports Hall of Fame in 2010.