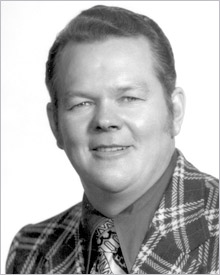 William Tainsh, known to all as “Bill”, was born in Consort, Alberta in 1936 where he took his schooling in and graduated in 1953.

Softball History:
Bill began playing softball on his school teams & continued playing, after graduating from high school, on a local Consort team which participated in tournaments in and around the Consort area, eventually in 1961 moving to Stettler to play in a senior league there.
In 1963 he moved to Edmonton and played fastball in recreational leagues.
In 1969, Bill started a team called the Sun Life Red Sox, which competed in the Senior ‘A’ League in Edmonton. He was the sponsor and General Manager. This team competed for the Senior ‘A’ Men’s FP Provincial Championship and played in the 1970 Canadian Championship in Edmonton.
Bill was the founder and sole sponsor of the Klondike Invitational Fastball Tournament which was held during Klondike Days, bringing in such teams as the 1971 World Champions, the Richmond Hill Dynes. This world class tournament continued for two more year’s and was played at Renfrew Park (now Telus Field).
In 1972, Bill was the co-founder of the Western Major Fastball League (WMFL) . This league consisted of five teams; Winnipeg, Regina, Saskatoon, Edmonton and Calgary. This league was very successful , attracting the majority of the quality fastball players in three provinces. The league continued with five teams for a period of two years. Winnipeg Colonels were the first recipients of the ‘Tainsh Cup’, aptly named after the league founder.
For the first two years, Des Archer was the Commissioner and Bill Tainsh was the Chairman of the Board of the Western Major Fastball League. After the second year, Des Archer resigned as Commissioner and the league appointed Bill Tainsh as Commissioner and Chairman of the Board. During the course of the following year, with efforts put forth by Bill Tainsh, the league expanded, bringing in Brandon, Weyburn, Camrose and Wetaskiwin. This allowed more games to be played because of the shorter travel time for teams in their own province.
Bill Tainsh was the owner of the Edmonton Monarchs from the inception of the league. In 1974 the team was sold to Lange Construction and became the Edmonton Langes. To make the league an even 10 teams, Bill went to Red Deer and formed the Red Deer Corvets. In 1975/76, the Red Deer Corvets won the WMFL Championship.
After selling the Red Deer Corvets at the end of the 1976 season, Bill stayed on as Commissioner of the League for a period of about three years.
Through the efforts of the WMFL being formed, there were 16 teams that competed for the Senior ‘A’ Men’s FP Provincial Championship in Alberta alone in 1972. This was quite an increase, considering that previous to that, there were maybe two or three entries for the Senior Men’s FP Provincial Championship.
Ball players that were attracted to the WMFL were Peter Brown for the Edmonton Monarchs, Pete Landers for the Red Deer Corvets, several American ball players, and players from New Zealand. The late Eddie Feighner (of the King and His Court fame) placed an ad in his program suggesting anyone who wanted to play top-flight ball should contact Bill Tainsh in Edmonton.
Many of the players, such as Jim Reed, Brian Sosnowski, Barry House, Gary Schurman, Les Barber, Peter Brown, and others, who played in the Western Major Fastball League, have been inducted into the Softball Alberta Hall of Fame.
Bill has always looked at fastball as a very exciting sport because of the size of the diamond and the quickness of the athletes. Although fastball has come down in numbers over the past few years, through Bill’s days as a player, manager, coach, sponsor, commissioner and chairman of the board, it is his hope that it will continue to grow for the entertainment of all softball fans.

Bill Tainsh’s huge devotion to softball and vision to create opportunities for all of us to see the best men’s fast pitch that Alberta has ever seen is worthy of this induction into the Softball Alberta Hall of Fame.