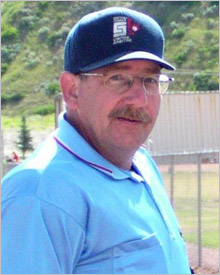 Joe Feller had a very long involvement with the game of softball; first as a player, then a coach, manager and finally (and best acknowledged) as an official. His officiating career began in 1987 and in only five years, he was nominated by Softball Canada to receive his ISF Level V certification. This was a reflection of the man and his dedication to and love of the sport of softball.

Joe was employed by the City of Lethbridge as a computer services manager and used his organizational abilities to build up the Lethbridge Softball Umpires Association, serving many years as the branch president. He loved playing racquetball, hunting and fishing and he left his mark on the officials in his branch and across Canada. He was a man who championed the Alberta Umpires program and who was often accused of evaluating even tougher than Softball Canada standards, especially in the area of dress by an official. He acted as a provincial evaluator for Slo-Pitch Umpires and was one of the original members of Softball Canada’s Officials Development Committee (ODC). He assisted in the development of the Level IV manual and was a clinician in the inaugural year. He also supervised at seven Canadian Championships and numerous provincial championships.

Joe Feller sadly lost his life in a boating accident in August of 2003.