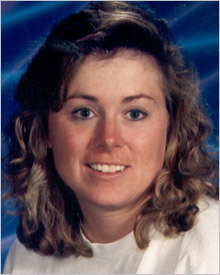 Shelley Gadoury has had a very successful career with the Calahoo Erins, leading her team to numerous National Championships. Under the guidance of her father Emile, she dominated at both the provincial and national levels, earning several top player and Most Valuable Pitcher awards along the way. In 1985, she led her team to a silver medal at the Canada Summer Games in New Brunswick. She was the top pitcher and MVP in round robin play at the 1988 Canadian Championships, and was voted MVP in playoffs with a 7-0 record. Gadoury was a member of Team Canada, and participated in the 1990 World Softball Championships in Normal, Illinois, earning a 7th place finish. Although she retired in 1998, she coaches and still conducts pitching clinics for local players.

Inducted as an Athlete in 2001