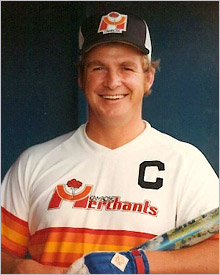 Ray McMillan, originally from Smoky Lake, was a force to be reckoned with at the plate and had a presence that fans loved. He began his career in the Edmonton Senior Men’s League, playing for renowned teams such as the Edmonton Playboys and the Sun Life Red Sox, and soon switched over to the Western Major Fastball League with the Edmonton Monarchs, and later, the Camrose Merchants. This third baseman with the big bat was voted captain of the Merchants in 1976, and hit over .300 in his first 5 years with the team. McMillan won numerous All-Star honors for his play on the field and was the league’s top homerun hitter with the highest batting average and hitting percentage, and most RBI’s. “Big Mac” was a fan favorite, winning Most Popular Merchant many times, and was a massive homerun hitter that drew crowds wherever he went. He helped his team to a Canadian Championship in 1984, and moved to Saskatchewan to play briefly with the All-O-Matics and Regina Molsons before retiring in 1988.

Inducted as an Athlete in 2006