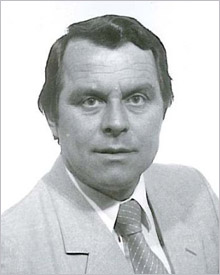 Peter Savinkoff, a native of Castlegar, BC, has had quite the awe-inspiring pitching career, with several remarkable highlights during his seventeen years of softball in Calgary. During the 1970 season in Men’s Senior A, Savinkoff had a 26-5 record in league and tournament play, struck out more than 300 batters, and pitched seven no-hitters and a perfect game at the Canada Summer Games, earning his team the tournament championship. As a result of this extraordinary season, he was named Calgary Top Athlete of the Year. He helped his team win countless championship titles, and participated in three World tournaments. Known as “the Duke” or “Big Train,” Savinkoff had an arsenal of pitches and was thought of as the Sandy Koufax of fastball. He would later earn the title of “Iron Man of Fastball,” as well as legions of fans, after pitching an outstanding 25-inning thriller against the Sun Life Red Sox, recording just one walk, twelve hits and 26 strikeouts, only to have his Calgary Power Chiefs lose, 2-0, in the Alberta championship game. Savinkoff was forced to retire from the game in 1975 after injuring his shoulder.