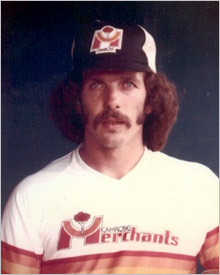 Peter Brown, a Scarborough, Ont. native, was considered one of the world’s best fastpitch pitchers during the 1970’s to 1990’s. He began his impressive career in Alberta, playing with the Western Major Fastball League, and was the first pitcher to win 20 games. After leaving the Edmonton Monarchs in 1976, Brown joined the Camrose Merchants, where he received their MVP trophy in 1979. He led his teams to numerous championships, including the 1 st World Series of Fastball. Brown then moved to Bakersfield, California, where he continued to play highly competitive ball and win National titles. He also gave back to the game by acting as a pitching coach for several high school, college, and university women’s teams. Brown was known as a tough, old Canadian Brute and the ultimate team player, and was a crowd favorite both on and off the field.

Inducted as an Athlete in 2005