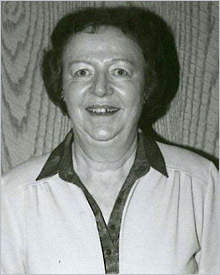 Merrie McGreeve, originally from Mannville, started her fastball career in her home town with the Bluebirds, winning the Intermediate B provincial championship in 1937 and 1940. After moving to Edmonton, she helped her teams, both the Army & Navy Pats and Edmonton Mortons, win the provincial championships and silver medals at the Western Canadian Championships. She was voted MVP of the Edmonton Ladies League in 1947, and won the Batting Average award, leading to an invitation to try out for the Girls Professional Fastball League in the U.S.A. the next year. Following a season in that league, she returned to the Mortons, and was voted playing captain by her teammates. In 1951, McGreeve led her team to both a provincial and Western Canadian Championship, and participated in the first ever Canadian Title to be staged in Canada. She continued to give back to the sport of softball after her retirement, and coached young players in her community.