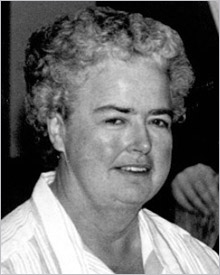 Maureen O’Connor was instrumental in promoting softball and supporting the sport in her many years as a player and a coach. This catcher-turned-pitcher won eight provincial titles as a coach or player from 1952-1974, and had eight Western Canadian and Dominion Championship appearances at the Senior A Level, winning the 1952 Western Canadian Championship with the Edmonton Mortons. O’Connor was active in recruiting players for her many teams, getting sponsorship and organizing fundraisers. She helped form the Girls Division, Midget and Juvenile classes, while serving as the president of the Edmonton Ladies Fastball League, and went on to coach and sponsor the Edmonton Capitals upon their formation in 1980.

Inducted as an Athlete in 1986