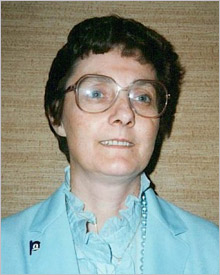 Marilyn Archibald, originally from MacKay, was very devoted during her 34 year involvement with softball in Alberta. She initially began playing as a replacement for pregnant teammates, then got recruited to the Edmonton Mortons as a short stop and catcher. She helped her team win nine Provincial championships and won the MVP Award from the Quebec Recreation Association, being the first Air Force, non-French speaking person to do so. After retiring as a player, Archibald coached intermediate and senior teams for nineteen years in the Calgary Ladies Softball League, and won the 1974 and 1977 Coach of the Year awards. She also won numerous Western and Canadian Championships both as a player and a coach. While working with the Department of Indian Affairs, Archibald organized several women’s and men’s skills clinics, teams and leagues in towns where she was stationed, and promoted the sport wherever and however she could, including writing her thesis on Softball Instruction, which was later adopted by the university of New Brunswick as their guideline for teaching the sport. Archibald devoted enormous amounts of time to community and executive service for the sport of softball, and would do anything to promote it.

Inducted as an Athlete in 1987