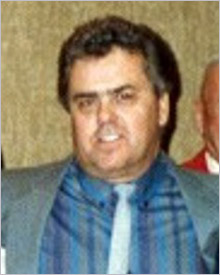 Ken Knowles was first introduced to softball serving as a bat boy for the Edmonton Mortons ladies team in 1943. Five years later, he joined the Army and Navy Senior team as a catcher, and had the opportunity to catch for Ed Feigner, of the King and His Court fame. Knowles was an expert batter, winning five consecutive batting championships with the Nu-Way Cleaners, and was awarded the Top Batter trophy by the Calgary Senior Men’s League. He joined the World of Sports Royals as a player/coach, and was named All-Star coach in both 1974 and 1975, leading his team to a berth in the Canadian Championships. Knowles was later named head coach of the Edmonton Acros in the Western Major Fastball League, and took his team to Western Canadians and several International Softball Congress Tournaments. This 14-time All-Star and 10-time batting champ devoted his life to fastball, winning several Canadian Championships as both a player and a coach. After retirement, he became the Commissioner of the Alberta Major Fastball League in 1982, and was also the President, Vice President and Treasurer of the Edmonton Men’s League.