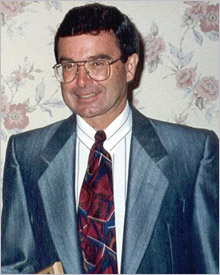 Jim McCool was a player that was known for his exceptional versatility and his enthusiasm for the game. He was a former member of the Calgary Orioles Senior Men’s Fastball team, which was inducted into the Softball Alberta Hall of Fame Team category in 1989, and was a key player in the team’s success. After serving as playing coach for the Cowley & Keith Intermediate fastball team, McCool retired and volunteered to coach his company’s team, Dome Petroleum. Although the team wasn’t as talented as their competition, their perseverance, combined with McCool’s passion for the game, gained them much success, allowing the team to make the switch to Senior A under their coach’s guidance. The team placed fourth at the 1983 International Softball Congress World Tournament, which was the highest placing of any Canadian team to that date. McCool led other teams to top 4 finishes at the tournaments, also winning a Canadian Championship along the way. He made the game fun for his players, and always challenged them to win when others didn’t expect them to compete.