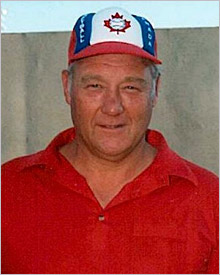 Jim Haley was a top pitcher, quickly mastering the art of windmill pitching to become one of Canada’s best. “Whitey,” played for many Calgary-area teams, including the Orioles, and competed in several championships across Canada and throughout the United States. Voted Top Pitcher in the Calgary Senior Men’s Softball League, Haley retired after fourteen years of play in 1967. This retirement was short-lived, however, as Haley returned to the sport upon the formation of the Pro Fastball League in Western Canada in 1973. He pursued a coaching career, and accepted a position with the Women’s National Team, where they competed in National and International play; Haley was also the Team Leader of the Men’s National Team in 1996. At the time of his induction in 1989, Haley held annual pitching clinics, and was still anxious to contribute to the sport of softball.