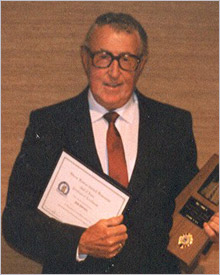 Jim Finney, born in Ireland, began his career as a short stop with the Hillburst Junior Fastball Club. After serving three years in the Navy, he returned to Canada and played senior baseball for two seasons before returning to softball in 1947. He joined Eric’s Used Cars, the top senior Men’s Fastpitch team in Western Canada at that time, and accumulated numerous Provincial and Western Canadian Championships with them and a number of other Calgary-area teams, including the Orioles. This captain, coach, and playing manager for the Calgary Orioles retired from play in 1968.