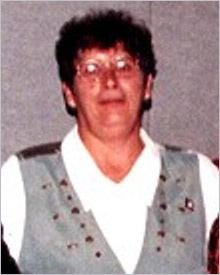 Jeanette Leinweber was a gifted natural athlete that excelled as a pitcher for several Calgary and Edmonton ladies’ teams. This former orthodox pitcher has won a number of gold and silver medals in Provincial, Western and Canadian Championships, and pitched a no-hitter at the 1969 Canada Summer Games, earning a 2 nd place finish in that tournament. Leinweber has also been named All-Star Pitcher, Top Pitcher and MVP in many Western and Canadian Championships, and had a career highlight playing for the Saskatoon Imperials in the World Championships in Osaka, Japan in 1970, helping the team to a 6 th place finish and becoming the only Calgary pitcher to pitch in the World Championship. She continued her very successful career as a Master with the Edmonton Encores and Calgary Classiques, and made the switch to coaching in 1989, heading several teams in the Calgary Double Diamond League.