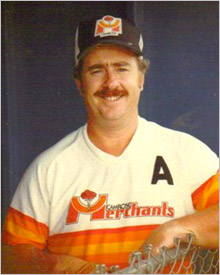 Harold Appleby, better known as ‘Cookie’, began his career in Ontario where he played Junior Men’s ball which led to the beginning of his Senior ‘A’ career. It was then that he played against players like Peter Landers, Peter Brown, George Chapman, Wally Dick and Jim Reed. He spent approximately ten years in the Ontario Fastball League. In 1972, ‘Cookie’ was asked to join the Richmond Hill Dines but due to prior commitments, he could not participate. That same year, the Dines won the World Championship in Manila.

In 1973 &74 ‘Cookie’ played in Yellowknife representing NWT at the Canadian Championships in Hull, Quebec and Victoria, B.C. ‘Cookie’ returned to Hamilton in 1975 where he played in the Ontario Fastball League for two years.

In the winter of 1976, Jim Reed, a long time friend of ‘Cookie’s contacted him about joining the Camrose Merchants Fastball Team, and so began ‘Cookie’s career in Alberta and the Western Major Fastball League.

He was also named the top batter at the World Series of Fastball in 1977.

The Camrose Merchants captured the championship at a tournament in Hawaii in 1977 and 1978 with ‘Cookie’ being selected to the All Star team in 1978. His batting average in 1979 was (.278) and in 1980 it was (.288), closely behind such stars as Marty Kernighan, Ray McMillan and Brian Sosnowski. ‘Cookie’, the league’s runs batted in leader during the regular schedule was named to the WMFL All Stars second team at first base.

During one of the playoffs a newspaper article stated; ‘Appleby has the hottest bat for the Merchants since the playoffs started as he has hit 13 for 23 for a (.565) average’. Appleby established a new mark and tied a second record in 1980 during the regular Western Major Fastball League schedule. He recorded a fielding percentage of (.997) in 1980. That broke the old mark of (.995) which had been set the previous year by George Chapman when he played for Edmonton. In establishing the new record, ‘Cookie’ committed only one error during the regular schedule. That tied a record for the fewest errors in a season by a first-baseman. At the 1980 World Series of Fastball, ’Cookie’ went two for three in the first game of the finals against Phoenix and two for two in the second game. He was selected as the All-Star 1st baseman on the World Series of Fastball’s dream team.

He was a consistent (.300) hitter during his career and was known around this country as one of the greatest sluggers in the game.

At the 2008, Senior Men’s Fast Pitch Canadian Championship in Saskatoon, he was named one of the five best retired Canadian hitters of all time.

Harold ‘Cookie’ Appleby’s outstanding and illustrious softball career is worthy of induction into the Softball Alberta Hall of Fame.

Inducted as an Athlete in 2009