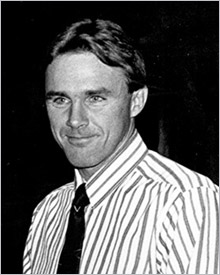 Glen Jevne was one of the finest pitchers in fastball from the mid 1980’s to early 1990’s. Known as “Bones,” by teammates and others, this master of the drop ball and change-up has had a career that has spanned 24 years, including 19 Provincial Championships and four Canadian Championship gold medals. Jevne was awarded Top Player on several occasions at the National Championships, and was the tournament’s MVP in 1988. He played an integral role in Canada’s gold medal performance at the 1987 Pan American Games in Indianapolis, U.S.A., and earned a bronze medal with the team the following year at the ISF Men’s World Championships. Jevne truly is a great ambassador for the sport and his current goal is to produce world class pitchers in Alberta; several of his prodigies have already made an impact on the Canadian midget and junior softball scene.

Inducted as an Athlete in 1998