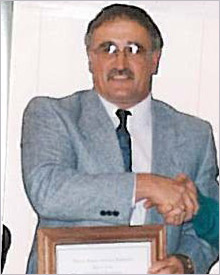 George Santoni was one of the best known fastball players in southern Alberta, and has been involved with the sport for almost thirty years. This pitcher helped his team, the Lethbridge Junior North Stars, win three consecutive Provincial Championships, from 1962-64, and went on to win a Senior B title in 1965. Santoni continued to win Provincial Championships at the Senior A and B levels, and has conducted several pitching clinics for Lethbridge Minor Softball.