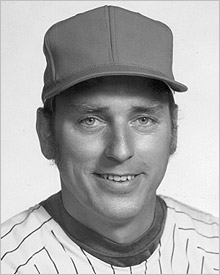 Gary Schurman was one of Alberta’s top catchers during his extensive senior and masters career. Highlights of his forty years of fastball include earning an All-Star award in 1974 from the Western Major Fastball League, and having the opportunity to catch for some of Canada’s top pitchers. This dedicated athlete played exclusively in Alberta, for the likes of the Camrose Merchants and Edmonton Monarchs; he played one year with the Regina Carlings, where he commuted from Edmonton to Regina for games. Schurman, originally a short stop, was a highly competitive individual with a good bat and profound intelligence for the game.

Inducted as an Athlete in 2001