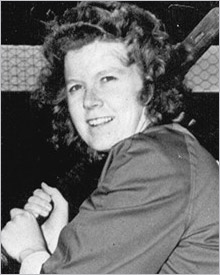 Edna Squire, a Blackfoot native, was a success from the very beginning, setting a pitching record of 101 consecutive games played with the Lloydminster Nationals in 1935. She joined the Royal Canadian Air Force in 1941, and played for their Headquarters team in London, England. After returning to Edmonton, she joined the Mortons in 1946, and had a remarkable career with them, recording four no-hitters. She was voted MVP of the year in 1946, which earned her an all-expense paid tryout with the All American Girls Fastball League. Squire was also selected All-Star pitcher in 1949 by the coaches and managers of Alberta and British Columbia, and helped the Mortons to a Western Canadian and Dominion title.