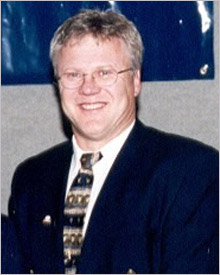 Bryan Sosnowski, born in Myrnam, was one of fastball’s most talented hitters and a threat at the plate to any team he faced. He was a sought-after commodity in the Western Major Fastball League, and was an exceptional short stop, first baseman, second baseman and outfielder. “Sos” played for a number of teams in Alberta, Saskatchewan, British Columbia, and Sioux City, Iowa, fulfilling a lifelong dream to play in the U.S.A. This line drive hitter led his team to several provincial and national titles, and was a 3-time All-Star at the Canadian Senior A championships. Sosnowski was a member of Team Canada in 1983, winning Pan American Gold in Caracas, Venezuela, and was a member of the ISC World Team in 1978, 1990 and 1993. This four-time WMFL All-Star was known for his opinion of the game, and was seen by his teammates as a practical joker with an endless ability to have fun.