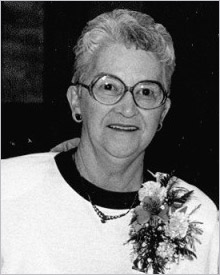 Bonnie Wright, a native of Govan, Sask., was a competitive and highly versatile player. She had great speed and huge range, and would rob the opposition of hits with her hustle and quick throwing release. Upon moving to Edmonton, she joined the Mortons, winning an impressive 4 Provincial, 2 Inter-Provincial, 2 Western Canadian and 1 Dominion Championship with the team. Wright also helped coaches teach skills to their players, and held a one-night clinic for female coaches in 1972. She coached the Parkallen and Capilano-area teams, and from 1978-81, umpired for the Capilano Community girls team, and the Hardisty Little League boys team. Her dedication to the sport continued into the late 1980’s, when she played 3 rd base for the Remax Real Estate Slo-Pitch team.