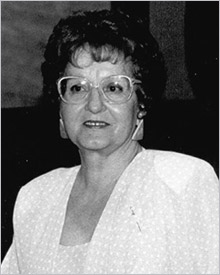 Blanche Williams, originally from Whitkow, Sask., began her softball career at fourteen years old, playing tournaments with her school team. This pitcher and outfielder was a member of the Room teams at the Saskatoon Teacher’s College prior to moving to Edmonton in the mid 1940’s. She thought her ball days were over until she was spotted by a Canora Ladies community team representative while playing softball in her front yard with her kids. Williams was asked to join the team, and after a year, went on to win provincial titles with the Shirley Diamond T’s and several other Edmonton-area teams. This soft-spoken, team contributor was the recipient of four team awards, and taught softball skills and good sportsmanship to her students, often umpiring recess-time games in the school yard. After 21 years as a player, she retired and went on to coach teams in her High Park community league, promoting the good qualities the game instilled upon individuals.

Inducted as an Athlete in 1990