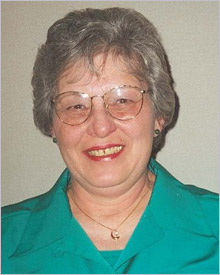 Bernice Lechner, originally from Regina, Sask., began her extensive softball career playing co-ed exhibition games with her one room school house team. She then joined the Regina Rockettes in 1960, and went on to play with several successful Edmonton-based teams. She was a talented pitcher, recording an ERA of 0.000 at the 1980 Senior Nationals in Hull, Quebec, becoming the tournament’s Most Valuable Pitcher, and earned six more Western Canadian MVP awards while pitching for the Edmonton Encores Masters. Her masters career also included several medals at Westerns, winning an impressive 5 gold medals. In 1982, with retirement pending, Lechner was asked to coach, which led to another successful career highlighted by a bronze medal at Midget A Nationals with the Blue Grass Bandits, and an assistant coaching position for the Canadian National Girls Youth Team in 1985.

Inducted as an Athlete in 2002