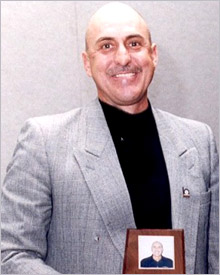 Barry House, a Winnipeg, MB native, was a constant threat to any pitcher he faced in the Western Major Fastball League, and collected an abundance of Top Hitter trophies. Known for his classic batting style and immense power, House made a name for himself wherever he went. He played for various teams in the WMFL, earning All Star honors for defense and offense every time. House set the bar in 1985-86 by winning back-to-back Canadian Championships and earning consecutive All-Star nods at the International Softball Congress tournament; his team also earned a bronze medal at the 1985 tournament. He was elected as co-captain of Team Canada in 1983, and helped the team to a gold medal victory at the Pan American games in Venezuela that year. With his intense leadership and impressive bat, House was one of the most respected players of the game during his thirty year career, both in Canada and the U.S.A.